We are now going to extend our model to consider variables that may influence or confound the association between our predictor and outcome variables. These new variables being considered are: sex, parents’ education and family social class.

The sex variable has already been recoded to be binary (see the Preparing the data for modelling section) and in this regression analysis we are using the category ‘male’ as the reference group.

In addition, we are going to include a few family background factors in the model. These include two parental education measures that denote whether the participant’s mother (n016nmed) and father (n716dade) left school at the minimum age or not; these are also binary variables. For both of these variables, we are using the ‘left school at the minimum age’ as the reference group.

The final potential confounder we are including is the social class of the study participant’s father (n1171_2). This is a categorical variable with 5 values. In Stata you can automatically create dummy variable(s) for each of the values in a multi-category variable by appending the prefix of ‘i.’ to the variable name, e.g. i.n1171_2. In this instance, it means that the model will compare each of ‘III Skilled non-manual’, ‘III Skilled manual’, ‘IV Partly skilled’ and ‘V unskilled’ against the ‘I/II Prof & Managerial’ category. Stata will use ‘I/II Prof & Managerial’ as the reference category simply because it is the first category in the variable. 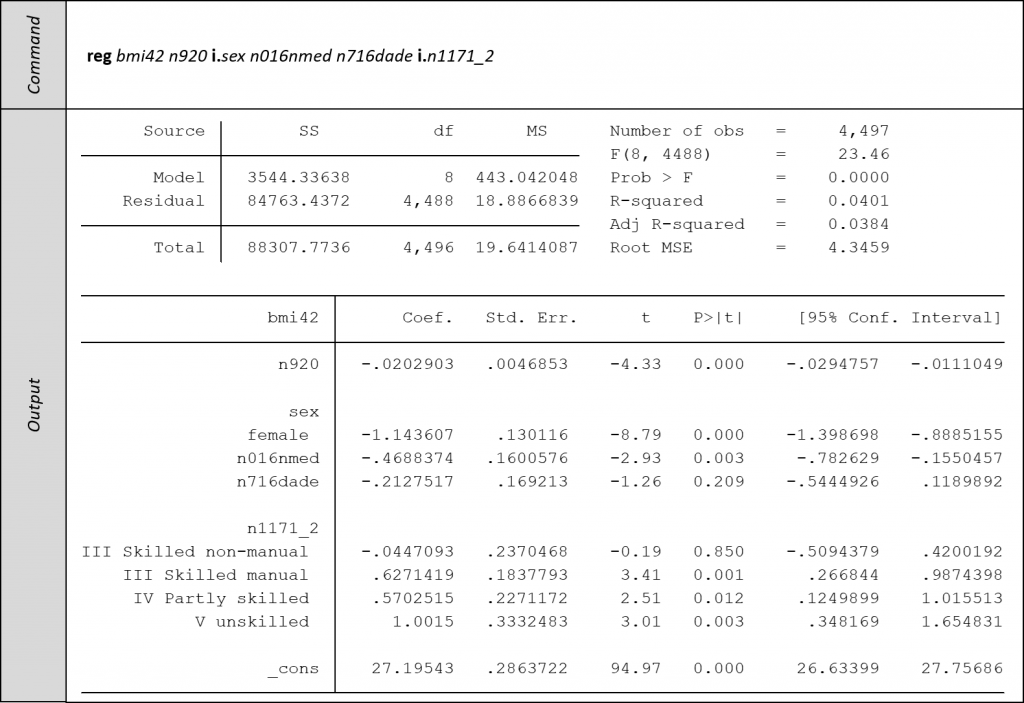 From the output table above, we can see that including the study participant’s sex and family background factors have not markedly changed the model. A small proportion, 4%, of the variance of BMI at age 42 is accounted for by family background, general ability at age 11 and the sex of the study participant. The participant’s general ability is still significant; for a 1 unit increase in general ability, we can expect a .03 decrease in BMI at age 42. The average BMI for females at age 42 is 1.14 lower than males, taking account of general ability at age 11. If the participant’s mother did not leave school at the minimum age, on average the participant’s BMI at age 42 was .47 lower than a participant whose mother left school. The father staying on at school was not significant, as this was explained by the father’s social class which was also included in the model. Social class and education are highly correlated; an individual’s educational attainment will in part reflect later occupational status which determines social class (You can explore this yourself as the syntax for the model above with social class excluded has been provided in the Stata .do file that accompanies this module). Compared to a participant whose father was in the highest social classes (I and II), having a father in the skilled and partly skilled manual social classes increased a participant’s BMI by .63 and .57 respectively (if all other factors remained equal). If the participant’s father was instead in the unskilled class, the increase in BMI was on average higher by 1.

In our final model we add bmi11, the BMI of the study participants when they were aged 11. By adding BMI at age 11 we adjust for earlier measures of BMI, thereby focusing on the change in BMI from age 11 to age 42. This allows us to measure BMI and general ability over a comparable duration from the age of 11 to 42 years. 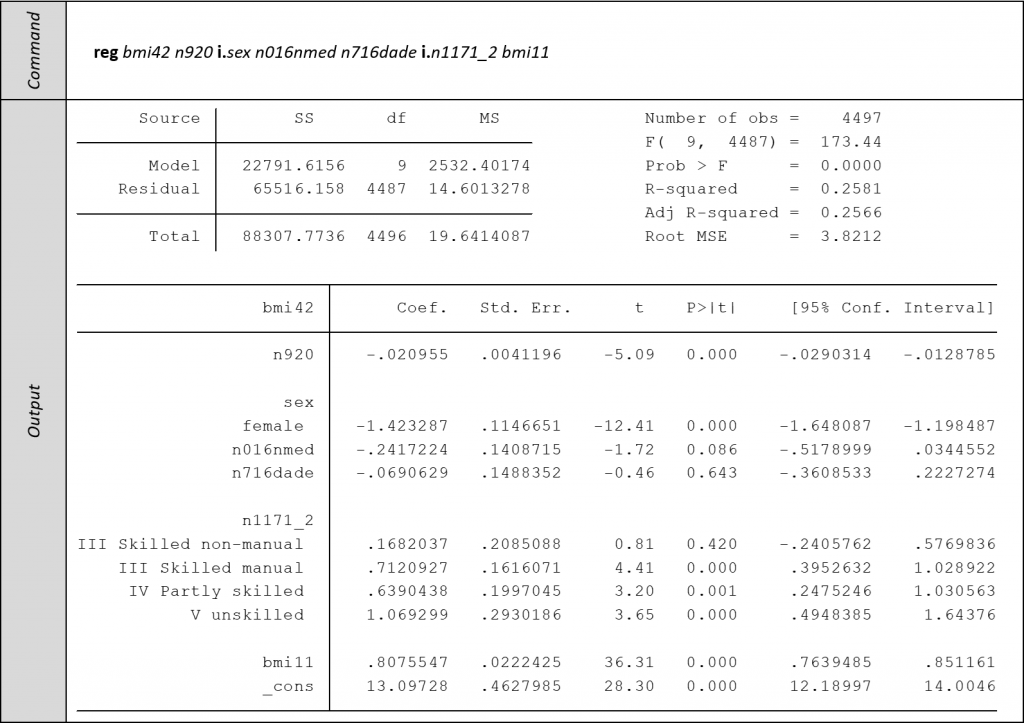 The R-squared value in the output table above tells us that a quarter (25.8%) of the variance of BMI at age 42 is accounted for when we include BMI at age 11, as well as family background, general ability at age 11 and the sex of the participant, in the model. We can infer from the fact that mother’s education is no longer a significant predictor in this updated model that childhood BMI explains its significance in the earlier model. However, all other factors that were significant in the earlier less-adjusted model remain significant in this updated model, including our ‘general ability’ predictor variable. It may be that the influence of mother’s education on the participant’s midlife BMI, for example, reflects the family’s early eating habits, physical activity and health behaviours, which would be more influential in a child’s early life and therefore be reflected in their childhood BMI. For a 1 unit increase in general ability, we would expect a .02 decrease in BMI at age 42. In other words, a participant with a general ability score of 60 at age 11 would have a .63 lower BMI score at age 42 than a study participant with a general ability score of 30 at age 11, after controlling for BMI at age 11 and other factors.

However, we have still only explained a quarter (25.8%) of the variance in BMI at age 42. There are other factors, not included in this analysis which may play a role in that unexplained variance as they are known to be associated with BMI, such as physical activity, diet, sleep duration, socio-economic factors in later life, parent’s BMI and genetic factors.

Back Plotting the results Next Regression diagnostics